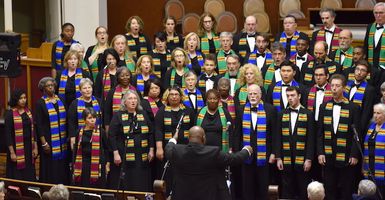 The Dorothy Cotton Jubilee Singers (DCJS) will present a concert of Negro Spirituals at 3 p.m., Sunday, Dec. 15, at Ford Hall in the Whalen College of Music, Ithaca College. The concert will include the debut of the Dorothy Cotton Youth Singers. The DCJS, a 501(c)(3) not-for-profit, Ithaca-based organization, is dedicated to preserving the Negro Spiritual and its themes of sorrow, despair, and hope to promote racial healing and social justice; and to furthering civil rights leader (and longtime Ithaca resident) Dorothy Cotton’s message of freedom and hope through music. DCJS has 100 members, including two dozen Ithaca College voice students, who perform many of the solos, alongside community members of different ages (18 to 82), heritages and backgrounds. It is led by Founding Director Dr. Baruch Whitehead, associate professor of music education at Ithaca College. The diverse chorus performs throughout the region; they have performed at the Kennedy Center for the Performing Arts in Washington D.C., and will perform in Saratoga Springs; Greensboro, N.C.; and Atlanta, Ga., this spring. The group is named in honor of the late Ithaca resident Dorothy Cotton, the civil rights pioneer who served as education director for the Southern Christian Leadership Conference alongside Dr. Martin Luther King, Jr. She often delivered her messages of freedom and hope through music. The concert is free with donations accepted. This program is made possible in part with funds from the New York State Council on the Arts, administered by the Community Arts Partnership; and from the Ridenour Shady and Kraut Family Funds of the Community Foundation of Tompkins County.